Founded in 1914 here in Palo Alto, Lakin Spears, LLP is a boutique law firm built on a long tradition of prompt, efficient and value-added legal services to our clients.

The history of Lakin Spears, LLP is a part of the living tapestry of Palo Alto and the San Francisco Peninsula, as well as a legacy of lasting contributions to the law and the legal community. Among the oldest law firms in Palo Alto, the firm was founded in 1914 by Judge Egerton D. Lakin. Judge Lakin’s father, Josiah Lakin, was one of the pioneering citizens of early Palo Alto, serving as president of the first Liberty Board and a member of the early Board of Education. Judge Lakin attended high school in Palo Alto, and upon graduation from Stanford Law School in 1910, he began practicing law in San Francisco before opening offices here in Palo Alto.

Away from the office and the bench, Judge Lakin took more than a casual interest in the local theater. He was active with the affairs of the Palo Alto Community Players, including leading roles on stage in numerous productions by the Community Players. Judge Lakin passed away in 1968.

As World War II ended, Andrew M. Spears joined his law practice with that of Judge Lakin in 1946 under the firm name of Lakin and Spears. Mr. Spears attended Stanford University and played basketball on the same team as Hank Luisetti, the Cardinal’s legendary All-American. He graduated from Stanford Law School in 1939 and practiced law for three years before serving for three years as an FBI Special Agent in Washington, D.C., Baltimore, Seattle and San Francisco during World War II.

Mr. Spears practiced estate planning at the new firm of Lakin and Spears. He literally laid the cornerstones of the Palo Alto legal community, as he fought for the construction of the North County Courthouse during the 1950’s and eventually witnessed its opening in 1961. Mr. Spears was one of the founders of the Palo Alto Area Bar Association and also served as its president. As a member of Rotary, he was one of the first advocates for admitting women as members and was instrumental in actually bringing that about in the Palo Alto Rotary Club. He was also a long time member of the Stanford Buck Club, the Palo Alto Club and the Commonwealth Club. Mr. Spears retired from the firm in 1986, and passed away two years later. In 1991, the Memorial Conference Room at the North County Courthouse was named in Mr. Spears’ honor.

The late Conrad F. “Connie” Gullixson, a bomber pilot during World War II, joined the firm in 1951 upon graduation from Stanford Law School, and continued the firm’s tradition of participation in Peninsula civic life. A business and estate planning lawyer, he served on the Palo Alto City Council and on the Stanford University Hospital Board, including one year as its president in 1978. Mr. Gullixson was the first person to sit as a Santa Clara County Superior Court judge pro tempore in the North County Courthouse in Palo Alto in 1964. A board member of the Palo Community Housing Inc. for 20 years, Mr. Gullixson also served as president of the Palo Alto Chamber of Commerce and Grace Lutheran Church.

With the addition of new members in 1969, the name of the firm was formally changed to Lakin Spears. Among the additions in 1969 was the late George H. Norton, who joined the firm along with Thomas D. Reese, through the merger of Norton & Reese with Lakin, Spears, Gullixson & Finwall.

A graduate of Brown University, Mr. Norton served as an officer in the Navy before attending Stanford Law School and beginning his law practice. After California became a no-fault divorce state with the passage of the Family Law Act in 1970, Mr. Norton devoted his practice at Lakin Spears exclusively to family law. In the ensuing years, he became one of the pre-eminent family lawyers in the state and a recognized authority in the field. Mr. Norton focused on complex economic issues of the family, including the valuation and goodwill of professional practices, stock options, and theories of property, income, and support. In the 1980’s, child support tables used in each county’s family court varied widely from one court to another, and were generally thought to be too low for children’s needs. Mr. Norton developed formulas and guidelines which are the basis of California’s current child support laws. He worked closely with various California legislators and legislative counsel in the passage of the child support guideline bill into law. Mr. Norton also was a pioneer in mediation, developing a family law mediation practice in non-adversarial dissolutions and premarital agreements in the early 1980’s and continuing until his retirement.

Mr. Norton wrote, lectured, and taught extensively. He taught family law at Stanford Law School, where he had also served on the Board of Visitors. He founded Norton Family Law Systems, which developed the support calculation program SupporTax. Mr. Norton was a Fellow of the American Academy of Matrimonial Lawyers and a Past President of the Northern California Chapter. Mr. Norton served on the first Executive Committee of the Family Law Section of the State Bar of California. He authored numerous family law publications for the California Continuing Education of the Bar (CEB), Family Law News, California Family Law Monthly, Stanford Lawyer, and other journals. Mr. Norton’s recognitions included Best Lawyers in America – Domestic Relations, Who’s Who in American Law, and Most Respected Lawyers (Family Law) by The California Lawyer. Continuing the Lakin Spears tradition of service to the community, Mr. Norton served as president of the Palo Alto Area Bar Association. A preservationist who had his homes designed with energy efficiency and the environment in mind, Mr. Norton was also a member of the Sierra Club and the Committee on Green Foothills, a non-profit land conservation organization active on the Peninsula.

Judge Lakin, Mr. Spears and Mr. Norton’s legacy of service to the community and contribution to the law formed the foundation for Lakin Spears in the years to follow. Thomas D. Reese, originally a civil litigator, contributed to the emerging field of alternative dispute resolution (ADR). He was appointed to the State Bar’s Committee on ADR and served as president of the California Dispute Resolution Council. Thomas J. Cahill, a successful trial lawyer and the firm’s managing partner for over 25 years, devoted his spare time advocating for women, children and seniors. In the mid-1970’s, Mr. Cahill and former Lakin Spears partner Dick LeMaster led the early fight for the admission of women to the Junior Chamber of Commerce. At the request of the Senior Coordinating Council of Palo Alto, Mr. Cahill assisted in gathering the survey data needed to convince the Palo Alto City Council that a senior center was needed. When Palo Alto Community Child Care was struggling to get off the ground, Mr. Cahill joined the Board around 1975 and served for approximately 17 years. Frank A. Small, now of counsel to the firm, was a member of Lakin Spears since 1965 and a driving force in transforming public transportation on the Peninsula since the 1970’s. A business and real estate lawyer and a Portola Valley resident, Mr. Small spearheaded the effort to pass the San Mateo County measure that led to the formation of the San Mateo County Transit District. Mr. Small was also a member of the citizens group that promoted and successfully managed the San Mateo County measure that brought BART down the Peninsula to the San Francisco International Airport.

Today a new team of dedicated and talented attorneys adds to the understanding in their respective fields, some of which were pioneered by the firm’s past members, and they continue the firm’s tradition of participating in and contributing to our community. Lakin Spears stands tall on its tradition of excellence in legal service and commitment to the community. 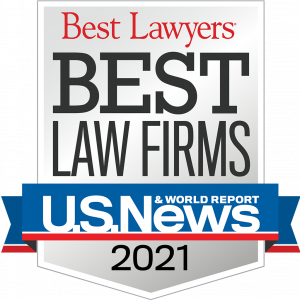 We have been named as one of the Best Law Firms in the San Francisco Bay Area every year since 2011 by U.S. News & Best Lawyers®.